Grupo Spurrier is the leading company in the provision of strategic information on economic and political issues regarding Ecuador, which we monitor through Weekly Analysis and Análisis Semanal. We specialize in economic research, competition advice, market research, business plans, and workshops in economic scenarios and regulatory changes. 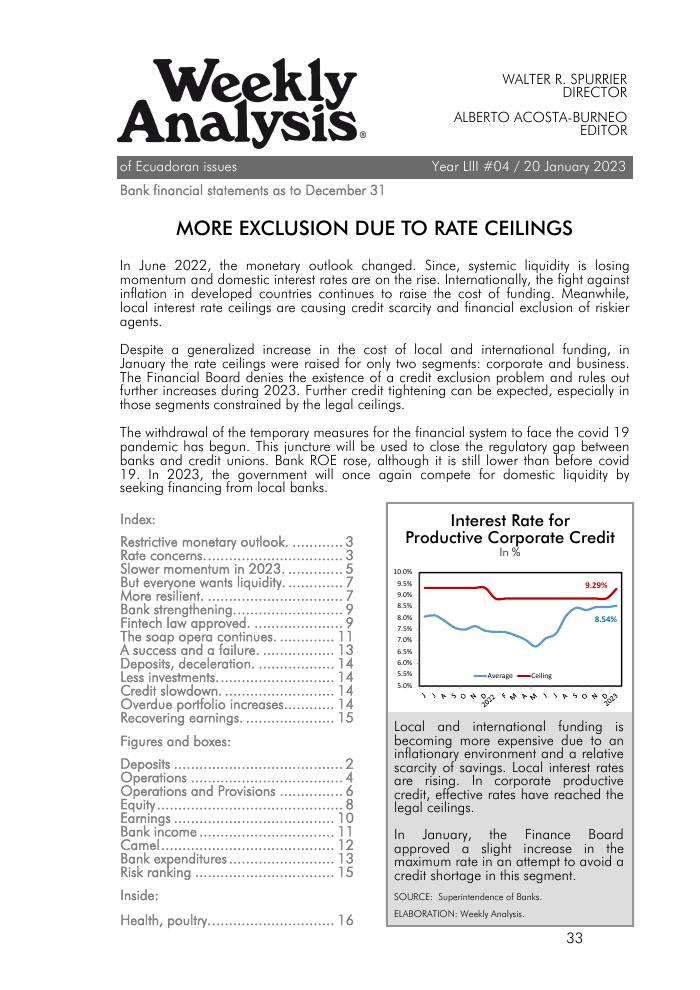 
In June 2022, the monetary outlook changed. Since, systemic liquidity is losing momentum and domestic interest rates are on the rise. Internationally, the fight against inflation in developed countries continues to raise the cost of funding. Meanwhile, local interest rate ceilings are causing credit scarcity and financial exclusion of riskier agents.   Despite a generalized increase in the cost of local and international funding, in January the rate ceilings were raised for only two segments: corporate and business. The Financial Board denies the existence of a credit exclusion problem and rules out further increases during 2023. Further credit tightening can be expected, especially in those segments constrained by the legal ceilings.   The withdrawal of the temporary measures for the financial system to face the covid 19 pandemic has begun. This juncture will be used to close the regulatory gap between banks and credit unions. Bank ROE rose, although it is still lower than before covid 19. In 2023, the government will once again compete for domestic liquidity by seeking financing from local banks. 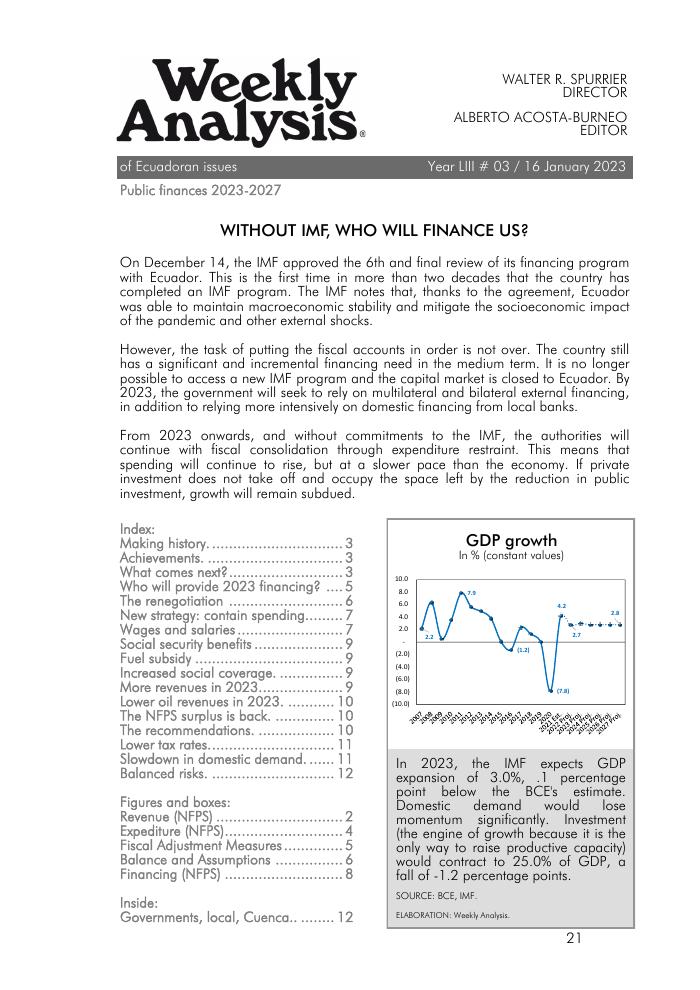 
On December 14, the IMF approved the 6th and final review of its financing program with Ecuador. This is the first time in more than two decades that the country has completed an IMF program. The IMF notes that, thanks to the agreement, Ecuador was able to maintain macroeconomic stability and mitigate the socioeconomic impact of the pandemic and other external shocks.   However, the task of putting the fiscal accounts in order is not over. The country still has a significant and incremental financing need in the medium term. It is no longer possible to access a new IMF program and the capital market is closed to Ecuador. By 2023, the government will seek to rely on multilateral and bilateral external financing, in addition to relying more intensively on domestic financing from local banks.   From 2023 onwards, and without commitments to the IMF, the authorities will continue with fiscal consolidation through expenditure restraint. This means that spending will continue to rise, but at a slower pace than the economy. If private investment does not take off and occupy the space left by the reduction in public investment, growth will remain subdued. 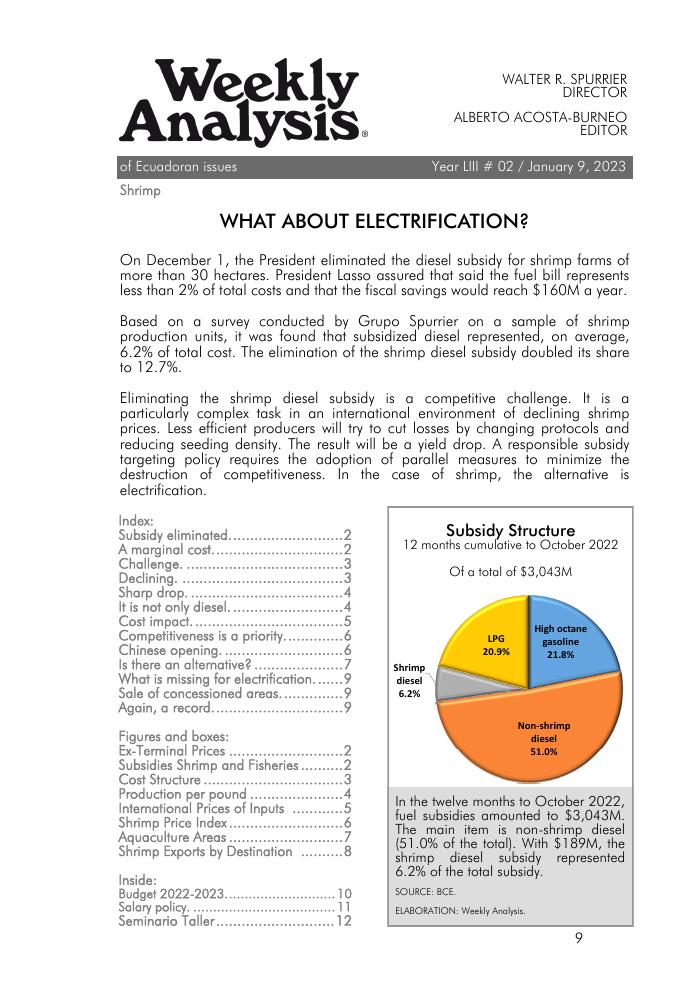 
On December 1, the President eliminated the diesel subsidy for shrimp farms of more than 30 hectares. President Lasso assured that said the fuel bill represents less than 2% of total costs and that the fiscal savings would reach $160M a year.   Based on a survey conducted by Grupo Spurrier on a sample of shrimp production units, it was found that subsidized diesel represented, on average, 6.2% of total cost. The elimination of the shrimp diesel subsidy doubled its share to 12.7%.   Eliminating the shrimp diesel subsidy is a competitive challenge. It is a particularly complex task in an international environment of declining shrimp prices. Less efficient producers will try to cut losses by changing protocols and reducing seeding density. The result will be a yield drop. A responsible subsidy targeting policy requires the adoption of parallel measures to minimize the destruction of competitiveness. In the case of shrimp, the alternative is electrification. 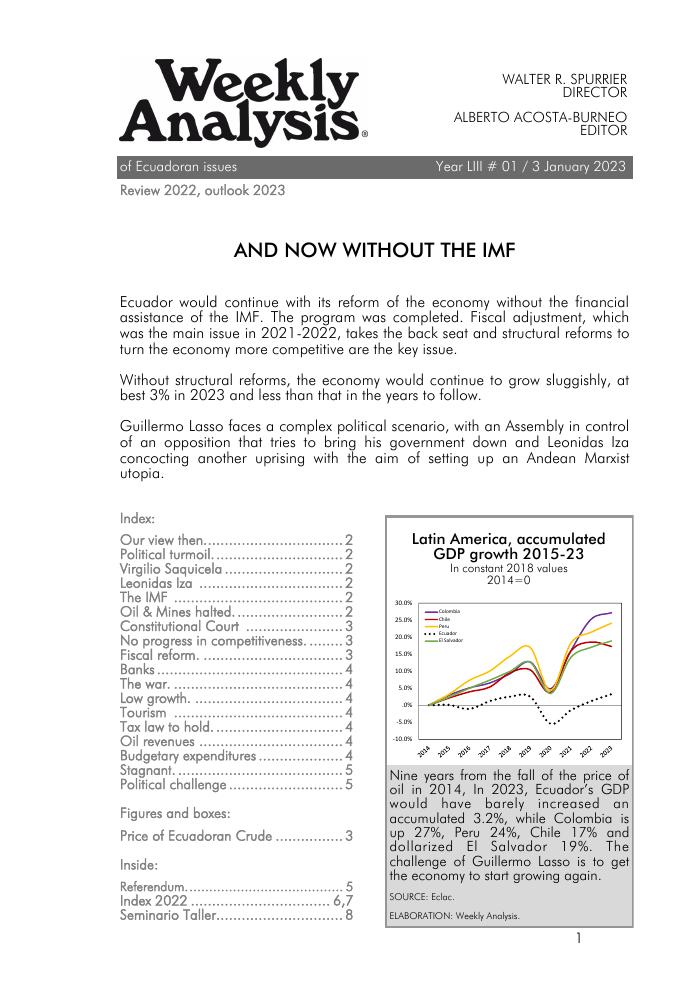 
Ecuador would continue with its reform of the economy without the financial assistance of the IMF. The program was completed. Fiscal adjustment, which was the main issue in 2021-2022, takes the back seat and structural reforms to turn the economy more competitive are the key issue. Without structural reforms, the economy would continue to grow sluggishly, at best 3% in 2023 and less than that in the years to follow. Guillermo Lasso faces a complex political scenario, with an Assembly in control of an opposition that tries to bring his government down and Leonidas Iza concocting another uprising with the aim of setting up an Andean Marxist utopia. 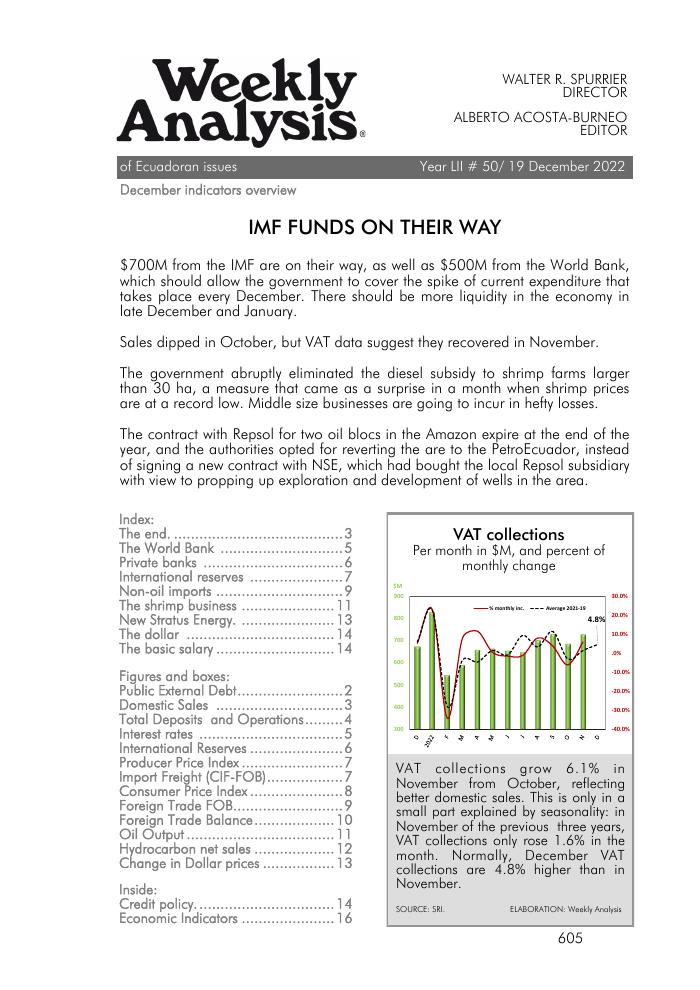 
$700M from the IMF are on their way, as well as $500M from the World Bank, which should allow the government to cover the spike of current expenditure that takes place every December. There should be more liquidity in the economy in late December and January.   Sales dipped in October, but VAT data suggest they recovered in November.   The government abruptly eliminated the diesel subsidy to shrimp farms larger than 30 ha, a measure that came as a surprise in a month when shrimp prices are at a record low. Middle size businesses are going to incur in hefty losses.   The contract with Repsol for two oil blocs in the Amazon expire at the end of the year, and the authorities opted for reverting the are to the PetroEcuador, instead of signing a new contract with NSE, which had bought the local Repsol subsidiary with view to propping up exploration and development of wells in the area. 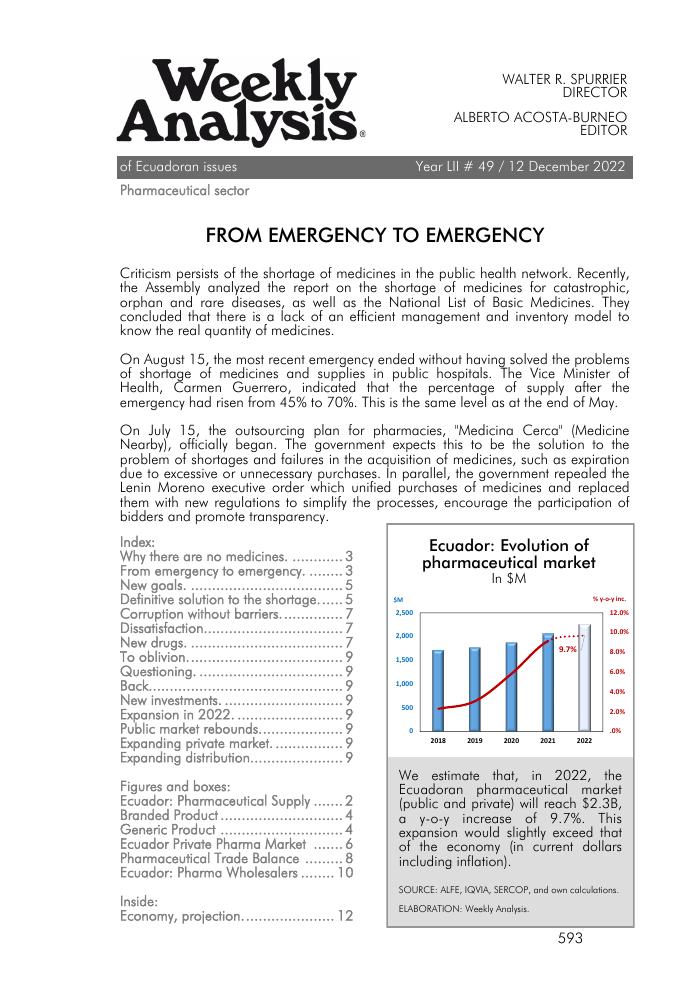 
Criticism persists of the shortage of medicines in the public health network. Recently, the Assembly analyzed the report on the shortage of medicines for catastrophic, orphan and rare diseases, as well as the National List of Basic Medicines. They concluded that there is a lack of an efficient management and inventory model to know the real quantity of medicines.   On August 15, the most recent emergency ended without having solved the problems of shortage of medicines and supplies in public hospitals. The Vice Minister of Health, Carmen Guerrero, indicated that the percentage of supply after the emergency had risen from 45% to 70%. This is the same level as at the end of May.   On July 15, the outsourcing plan for pharmacies, "Medicina Cerca" (Medicine Nearby), officially began. The government expects this to be the solution to the problem of shortages and failures in the acquisition of medicines, such as expiration due to excessive or unnecessary purchases. In parallel, the government repealed the Lenin Moreno executive order which unified purchases of medicines and replaced them with new regulations to simplify the processes, encourage the participation of bidders and promote transparency.

¿Can I help you with something?
8:20
Send message